Overview
In a loot-focused game, one of the most common and central player goals is that of creating a personal set of gear that achieves a desired form and function. One system that facilitates this goal is called transmogrification, or "transmog." In a transmog system, players have the ability to apply the appearance of one piece of armor to another within a given slot (e.g. helmets can only take on the appearance of other helmets), while maintaining the original functionality of the recipient armor piece. These kinds of systems are important and powerful because they allow players to pursue their form and function goals independently.

A transmog system has already been announced for Destiny 2, and because details and specifics have not yet been shown, I thought it might be fun and interesting to explore how the UX of that system might come together.
Project Goals
In order to kick the project off, I asked around within my Destiny clan about what an ideal transmog system might look like in Destiny. Based on those conversations and my own experience in Destiny and in other games with transmog, I arrived at these three high-level experience goals:

As a player...
I also outlined some key design assumptions:
Planning
With my goals and assumptions laid out, I started plotting out how this system could work in Destiny. The first step was counting all the loot; because of assumption #1, I would need to figure out how many pieces of armor might need to be displayed on screen for transmog. Additionally, as more armor will be added in future updates to the game, the system would need to be able to expand to accommodate new items.
​So, as the game stands today, the most accomplished player in Destiny would need to be able to walk through 131* different pieces of gear per armor slot to choose their desired appearance. Wow! That's a lot, especially when we consider that the existing system for armor cosmetics only has two rows of seven options to choose from, with an option for pagination. This was especially important to nail down because it let me know that we would need to dedicate a lot more screen real estate towards showing aesthetic options than Destiny currently has available.
Choosing an appearance for a piece of gear
​In order to accommodate the need to display so many pieces of gear on screen, I borrowed the UI paradigm of the half-screen flyout from the existing Lore tab and repurposed it as a sort of "dressing-room" for a player's Guardian. This approach allows the player a much broader view of their available aesthetic options while still keeping focus on the character, thereby making it quick and easy to peruse different options and find the right one.

Additionally, by moving away from the 2x7 grid, this design would eliminate the clicks that would come from the pagination required to represent all 130-some pieces of gear. Although this is important on PC, it's especially critical on console, where clicks take longer by nature of players using an analog stick to manipulate the cursor.
Saving a look for later
​In order to address goals #1 and #3, players would have the ability to create "glamor prisms" that effectively store their current aesthetic appearance as an item for later use. I considered a couple of different approaches here, such as an independent, account-based, cosmetic-only character screen or an inventory-based system like the existing Eververse ornament approach. However, I kept coming back to the current character screen as the home for all actions that a player can take on their Guardian, and as such, thought it would be incongruous to put this functionality anywhere else.

I did have to make one destructive tweak to make this change work, which entailed moving the Clan Banner (which usually occupies the front page) below the fold. This seemed like a reasonable concession given that players don't need to interact with the Clan Banner very frequently, as it largely acts as a progress indicator for Clan progress over the course of a season.
Applying a look to a new set of armor
Continuing towards fulfilling the need for quick aesthetic customization called out in goals #2 and #3, players can preview and apply the look that they have saved in a prism to their current set of armor. This approach is for players who already know how they want to look and simply want to apply that look to their newest, most powerful set of armor.
​
​One potential issue not showcased in the video might be distinguishing different saved prisms. Although players can preview the set they have saved by hovering over the prism thumbnail, it would be useful for players to have distinct thumbnails for different looks. This could potentially be player-chosen (a selection menu allowing the player to choose a specific thumbnail for a given prism), or sequentially-assigned (the first prism a player creates is purple, then the next one is blue, and so on). Destiny doesn't have a precedent for this kind of interaction, so determining the right approach would likely require additional player research and cooperation with engineering. ​
In-game impacts
One other consideration that came up during the course of the project was the in-game impact of the transmog system. Although transmog's impacts are largely felt in the character screen, I thought about what about the in-game experience might need to change to accommodate it. I came up with one "nice-to-have" tweak: alerting players when they earn a piece of gear that unlocks a new look for them.

Because players frequently, earn duplicates of different pieces of gear in Destiny, it seemed potentially valuable to call out when they received a piece of gear that was net-new to their pool of aesthetic options. This would have the implicit effect of alerting them to a new aesthetic option at their disposal, but it could also make earning new gear feel that much more special—a 2-for-1 bonus of a new piece of gear and a new cosmetic option when you want it. 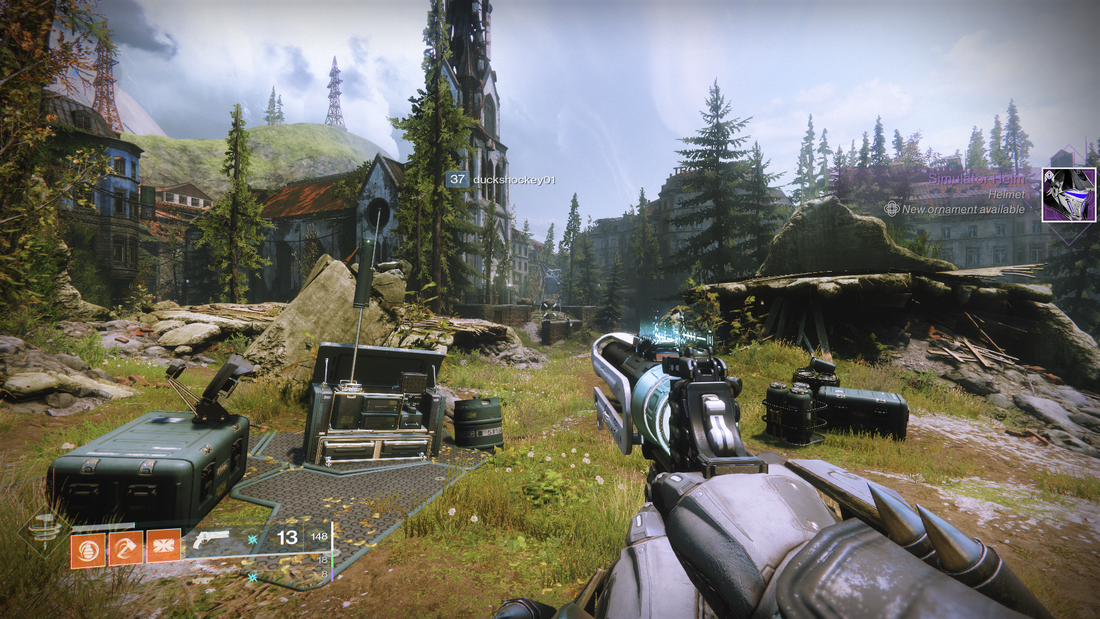