This is a short description on the general purpose and functionality of our Ridesharing CUI. For a full overview of the research and design thinking that went into the system, please refer to our process book and our pitch of the service.
​​
The advent of driverless vehicles being deployed in ridesharing services demands an elegant and robust user interface. This three-week project focuses on the design of a conversational user interface (CUI) for such a context.​​

Conversational User Interfaces (CUIs) offer the opportunity for humans to interact with a system without tactile controls. All CUI interactions consist of a conversation between system and user; examples of such interfaces include Amazon's Echo, Google's Now service, and Apple's Siri. While this new style of interaction is becoming increasingly common in mobile and desktop computing services, the advent of automated cars and ridesharing services suggests an opportunity for integrating CUIs into driverless vehicles.
As companies like Uber begin to test the efficacy of driverless vehicles within their existing ridesharing services, it becomes clear that there is a strong need for a reliable and elegant user interface. Uber's current driverless fleet actually provides two humans per vehicle to as a safeguard against potential failure, as well as a tablet interface for users to confirm their identity and destination. However, our intuition when starting this project was that traditional, human-driven Ubers rely heavily on rider instruction and intervention to effectively provide service. For instance, a rider might ask a driver to take a different route or to stop earlier than anticipated. The presence of a human driver makes either of these tasks trivial, but in the absence of a human, they become much more difficult.
It struck us as critical to both rider safety and the continued efficacy of ridesharing services that users have an interface that gives them the control they need over a driverless vehicle, while making them feel at ease while en route. In order to better understand users' needs, desires, and frustrations when using ridesharing vehicles, we conducted a short survey of ridesharing users. This survey confirmed to us that a focus on these sorts of "microinstructions" were key to a comfortable ridesharing experience; as such, they made up the brunt of our effort when designing our CUI.

Based on user research with ridesharing customers, competitive analysis, and prototyping, we determined that our CUI would need to fulfill four primary design goals:

1. The user must feel comfortable in the car
Because both automated cars and CUIs aren’t yet socially mainstream, it seems like an important consideration that riders
feel at home and in control of the vehicle, so as to avoid any discomfort or dissonance when giving the system directions.
(ending up at the wrong location, having an accident).

2. The user must be able to make separate stops, come back to the car, and continue their ride
The ability to make separate stops benefits for both users and ridesharing companies: automating the vehicle has the benefit of prompting users to think of the car as a tool to use at their discretion, rather than a service to be employed. At the same time, ridesharing companies reap the benefit of users being able to fit ridesharing into their lives more often than previously possible.

3. The user must be able to make small navigational corrections
Current rideshare drivers often have to contend with “microdirections” from riders (e.g., “drive further up the block,” “stop at
the red house,” etc.). Our research indicates that this is an important feature to users, therefore our system should strive to
accommodate it. 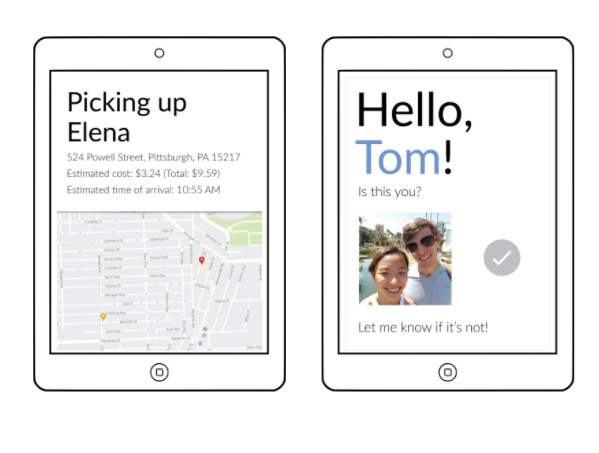 Our design’s physical aspects are comprised of a traditional car interior with a tablet display situated at the windshield. This is the point where the CUI’s “voice” emanates, and it serves as a point of visual focus for riders. Although it is not critical to the CUI, the tablet display is also able to display useful supplementary information like a rider’s photo when they enter the car, in order to confirm that they are in the right place.

Our pitch of this service was comprised of a video demonstrating use of the system, as well as a pitch document detailing our research, design intentions, and dialogues comprising the CUI. The scenario video can be watched below, while the pitch document can be found here.
​