Overview
Early in 2019, I pursued a personal project centered on designing UI/UX mockups for a hypothetical new entry in the video game series Wipeout. For this project, I wanted to explore what sorts of features a Wipeout game released in 2019 might have, and what UX considerations those features might require. Additionally, the project was an opportunity to play in the sandbox that is Wipeout's design philosophy: a stark, aloof vibe first explored by The Designers Republic in the mid-nineties and then refined in later years.
​

Animation run-through of the whole project

Player Nameplate
Players have an ever-present nameplate in the top-right of the menu that can be pulled down with the right trigger to show current season tournament stats for their chosen team, including time until the end of the season, current placement, and their contributions to the team. Potential expansions on this idea could include quick actions relevant to the team (like quick-joining online races that could positively impact the team's standings in the season tournament. 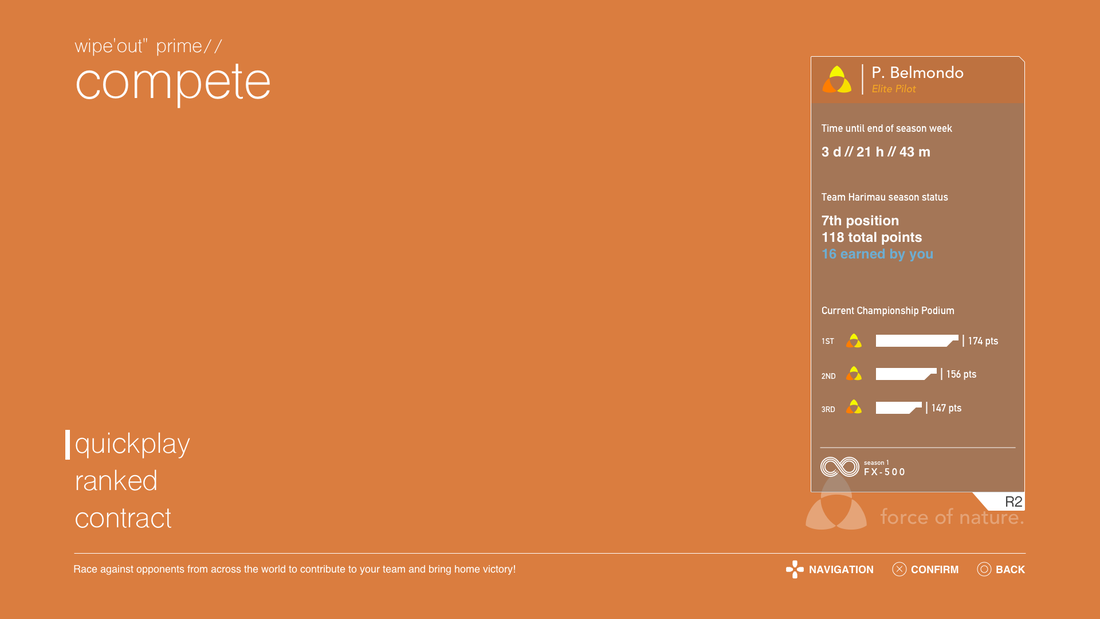 ​Team-custom UI colors and style
Choosing to sign with a team reflects their branding colors and iconography on the UI background, serving to make even the player's experience navigating menus feel like part of their experience with their selected team.
Event selection and information
Players are given a choice of three events to run per day (a la Gran Turismo Sport) in order to ensure that players on different teams have a focused and fair competition against one another. Each event card is designed to resemble a futuristic ticket-stub, which then unfolds on selection to reveal event information and how placing in the event could impact the season's overall tournament standings.